GadgetSquad.id – OPPO Indonesia re-launched its newest smartphone, namely OPPO Reno4 F. Previously, OPPO had already released the OPPO Reno4 and OPPO Reno4 Pro types. The addition of the letter 'F' on the latest OPPO smartphone is also its characteristic and differentiator. The letter “F” which stands for “Fashion” emphasizes that this smartphone boasts a fashionable design, apart from of course the reliability of its various features.

OPPO Reno4 F is here targeting the young target market. No wonder the appearance of the design is one of the highlights. In addition, of course, the camera feature is also a whiz feature. OPPO Reno4 F is equipped with a camera with features based on Artificial Intelligence technology.

The first time I saw the OPPO Reno4 F, I was quite amazed by the color display. It just so happened that GadgetSquad reviewed the Mate Black color. OPPO Reno4 F appears with a body with a Shiny Matte appearance, where the rear body is coated with an anti-fingerprint coating, using a new optical coating technique. This layer if exposed to the transmission of reflected light will produce varying colors when the phone is held at different angles. Especially for the Metalic White body color choices, the color changes will be seen.

Not only does it look stunning, the OPPO Reno4 F body also provides a comfortable feeling when holding it. Feels thin and light enough body. It's only 7.48mm thick and weighs just 164 grams. The body of the Reno4 F is quite sleek and comfortable to put in your pocket. When compared to Reno4 which has a thickness of 7.7mm, the Reno4 F is 0.22mm thinner. 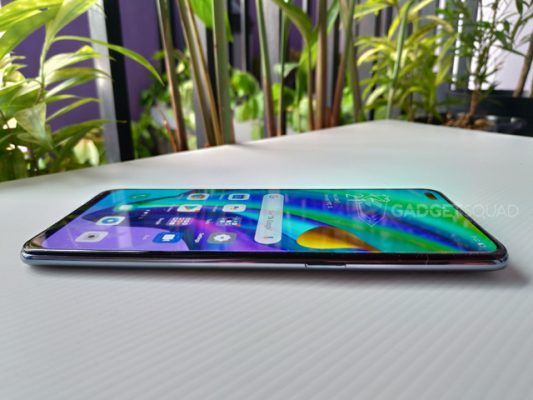 Smartphones with thin bodies often produce sharp corners on the edges of the frame. This can interfere with comfort when held. To overcome this, according to the information obtained, OPPO designers used a design technique with rounded edges at an angle of 220 °. This produces body edges with a thin side appearance while providing one-handed grip comfort.

Turning to the screen, OPPO Reno4 F has a screen with a Dual Punch-Hole design, namely in the upper left corner of the screen, two front camera holes are embedded. This screen displays a unique camera diameter that appears smaller, only 3.7mm. That way it can provide more space outside the screen so that you feel more satisfied in enjoying the content that appears on the screen.

The screen itself has a diagonal size of 16.34 cm. Moreover, it has been supported by the Super Amoled screen type with Full HD + resolution. No wonder the image display on the screen looks sharp, be it when viewing photos, watching videos to playing online games. Likewise, when brought to conditions under direct sunlight, the screen display is still visible. 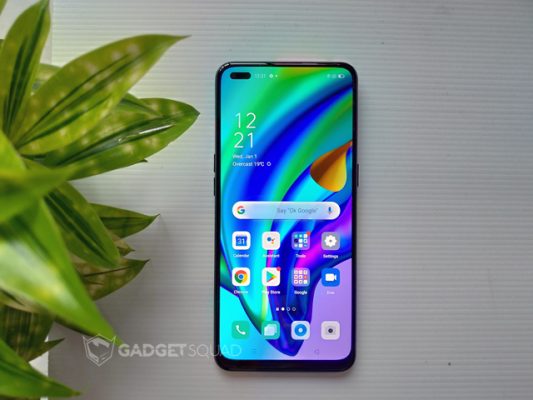 The OPPO Reno4 F screen is also a place to embed a fingerprint scan or it is called In-Display Fingerprint Unlock 3.0. In this latest version, this fingerprint capability is able to open the locked screen in only 0.3 seconds.

The camera feature is another mainstay of OPPO Reno4 F. This is evidenced by carrying 4 cameras on the rear body. The design of the four camera lenses is also quite artistically designed in a square frame.

One of the great things about the camera at OPPO Reno4 F is that it is equipped with several features based on Artificial Intelligence (AI) technology. One of them is the AI ​​Color Portrait Mode, which can isolate colors in photos, make the background black and white while keeping human objects in their true colors. This feature displays very clear and contrasting colors, making the photo look like a work of art that will become a trend among young people.

There is also an AI Super Night Portrait feature, this feature can produce clear selfies even at night. Suitable for taking selfies in dim conditions such as in a bar or under street lighting. Designed for low light conditions, the Reno4 F incorporates a range of AI algorithms including HDR, which instantly captures and combines multiple frames at various levels of light; facial recognition, and highlight emphasis, which brighten portrait photos without overexposing the background, for brighter, clearer, better-quality portrait shots at night. 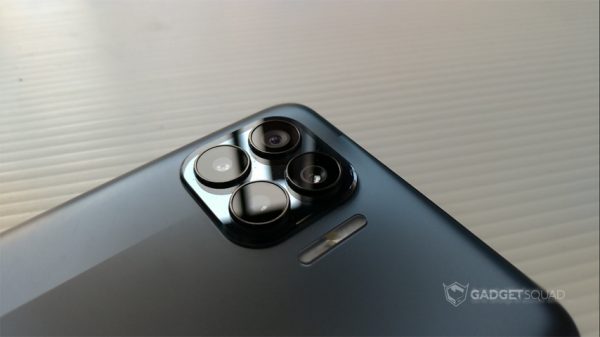 The camera on the OPPO Reno4 F is also equipped with AI Night Flare Portrait. This feature will produce an artistic neon effect on the background (background) of the photo object. AI Night Flare Portrait combines a bokeh effect and a low light HDR algorithm to brighten photos in low light environments, while adding a bokeh background effect. This effect will be seen in results when the photo is taken in a location full of urban lights, which makes the object appear brighter.

Furthermore, there is the AI ​​Super Clear Portrait feature that will increase the detail when taking portrait photos. The Reno4 F uses facial reconstruction technology which is equipped with an artificial intelligence and deep learning technology that allows facial details such as eyebrows to be enhanced or reconstructed to ensure clearer portrait photos. There is also a 2nd generation AI beautification feature, which has been adjusted for beauty preferences by maintaining natural skin tone without losing detail.

Do not miss the ability to produce photos with a bokeh effect. Even the camera capabilities at OPPO Reno4 F are capable of producing bokeh photos with many people in one frame. Amazingly, this bokeh effect can also be applied to video recording.

For durability, OPPO Reno4 F is equipped with a large capacity battery, which is 4,000 mAh. When you try it for normal use, such as opening a social media account, watching YouTube videos, watching streaming movies to playing online games, the battery capacity at OPPO Reno4 F can last a full day.

Interestingly, this latest OPPO smartphone introduces a new way to optimize battery life. Namely with the AI ​​Night Charging feature which will regulate the charging of the smartphone battery where right when the battery is up 100%. The way it works is by utilizing AI Learning technology to study the sleep habits of the user, so battery charging will be regulated where the remaining 20% ​​will be done in 90 minutes before the user wakes up. That way it will protect from damage due to charging over time. 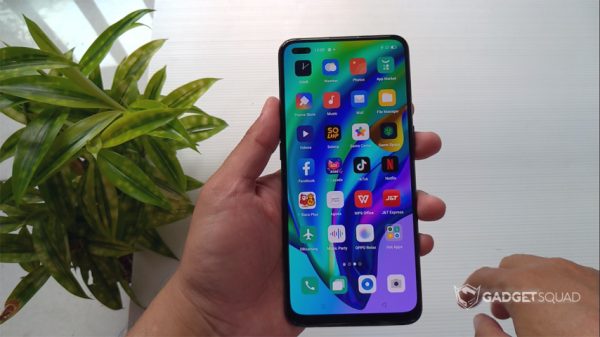 Then during the day when the user does not carry a charger or power bank, there is a Super Power Saving Mode feature that can optimize 5% battery life by changing the screen to black and white, and only running six predefined applications.

For example, when the battery is 5%, users can still open the Grab application for 77 minutes, can call for 70 minutes, can open Google Maps for 52 minutes, can use SMS for 49 minutes or can use WhatsApp for 35 minutes. Do not miss the 18W Fast charging feature, which when you need to charge the OPPO Reno4 F battery quickly, it can be done.

For performance, the OPPO Reno4 F is powered by a MediaTek Helio P95 AI 2.2Ghz processor with 8 Cores. It also supports 8GB of RAM and 128GB of memory. This memory capacity can be increased up to 512GB with external memory.

The performance of the OPPO Reno4 F is also supported by the Anti-Lagging Algorithm technology, this makes the way the Reno4 F works faster. I really feel, when I try to open several applications at once (multitasking) and also open heavy applications, such as online games, it doesn't feel choked up. OPPO Reno4 F is able to run it smoothly.

The performance of OPPO Reno4 F is also supported in terms of software. Where this latest OPPO smartphone adopts ColorOS 7 based on Android 10. Apart from providing smoother performance, there are several new features that ColorOS7 brings. One of them is the user interface design of application icons. Users can customize the appearance of their UI, you can also choose a UI design that has been provided. Users can also adjust the size, shape and position of the application icon on the Homescreen.

ColorOS 7 also carries the Multi-User Mode feature which provides 5 User Mode options that have been provided. That way you can protect various files or personal data from the use of other people, for example when a smartphone is used by their children. The five User Mode options have different access levels (user, sub-user, visitor). And each user mode can be secured by using a password.

ColorOS 7 also includes a Screen Image Engine (OSIE) Ultra Clear Visual Effect feature. This is OPPO's self-made feature to increase the saturation and contrast of videos from other apps. That way the video display will still look sharp.

In addition, there is also a High-bandwidth Digital Content Protection (HDCP) feature that allows OPPO Reno4 F to transmit HD video (with copyright) to the big screen. This is useful for those of you who like to watch movies on Netflix HD and then want to cast them on a wider screen.

OPPO Reno4 F is present in Indonesia in two color choices, Metallic White and Matte Black. Orders for this device will take place from 12 to 16 October 2020 via store.oppo.com/id, as well as the OPPO Store offline network. Consumers who ordered this device during the period Pre order will get an immediate prize in the form of Giftbox OASE LP01 worth IDR 800,000, Telkomsel TAU Entertaiment Special Bundling Package up to 70GB. OPPO Reno4 F will be sold first on October 17, 2020 at a price of IDR 4,299,000.

These are the prices and specifications of the OPPO A92 6GB

OPPO Reno 4F Indonesia can be purchased at a price of IDR 4.3 million

Price and advantages of Infinix HOT 10, use Helio G70

Tips for Saving Internet Quota During a Pandemic